Stephen Wing is a poet, novelist, and lifelong activist in environmental and social justice movements.

“I am interested in the Wilderness Act Performance Series because what I have learned from nature has shaped my writing as a poet.  I am a wilderness-lover who grew up with summer canoe trips in the Boundary Waters of Minnesota and Ontario.  Wilderness has been my highest teacher ever since.

I am convinced that civilization is doomed unless individuals re-connect with nature; yet nature itself is doomed if all of us decide to tramp through the woods in search of nature’s teachings. Urban wilderness is thus key to the salvation of both nature and civilization. Deepening my own acquaintance with these green spaces will help me introduce other city-dwellers to the wilderness within their reach.” 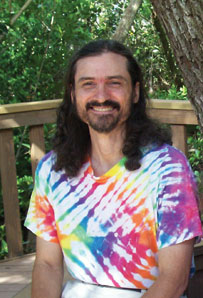 I live a hermit’s life in downtown Atlanta with my wife, Dawn Aquamarine Aura, and a houseful of animals. On weekdays I order and stock the frozen foods at Sevananda Natural Foods, the Southeast’s oldest and largest food coop. In my spare time, between operating a neglected bumper sticker business and volunteering for various causes, I sometimes write. Every so often I get around to publishing my work, mostly essays in local Atlanta publications.

Raised in Southeast Asia as the son of Methodist missionaries I went on to earn a B.A. in English Composition from Beloit College, class of 1978. I spent my post-college years on the road, perfecting the mystical art of hitchhiking and keeping my overhead down. In 1990, I married Dawn and settled in Atlanta.

During my years on the road I published an annual chapbook of poems to give away as I traveled. The best of these were collected in Four-Wheeler & Two-Legged: Poems (Southeastern Front, 1992).   I am also the author of Crossing the Expressway: Poems from the Open Road (Dolphins & Orchids, 2001), chronicling my 100,000-mile hitchhiking career; In the Presence of the Disappeared (self-published chapbook, 2003), an epic poem about my experience on a peace delegation to Colombia, South America; Proof of the Miraculous: Campfire Poetry from the Rainbow Gatherings, a poetic record of 30 years of Rainbow Gatherings; and Washed in the Hurricane, a series of themed chapbooks.

Several dozens of my poems have also seen print in local, regional and national periodicals and anthologies, and I perform regularly at peace rallies and other activist events.